What are the Top Pharmaceutical Companies in the World?

The Industry has again show strong growth in 2018 with worldwide revenue now exceededing 1.2 Trillion US Dollars and projected to continue to grow strongly fueled by an ageing population and a worldwide growth in consumer spending power.

Here is a list of the top 15 largest pharmaceutical companies in the world based on 2018 revenue.

Novo Nordisk is a Danish pharmaceutical company founded in 1923, with global headquarters in the Danish town of Bagsvaerd. Its key products are diabetes care medication. Over 29 million patients use their products and the company produces almost 50% of the world’s insulin. Novo Nordisk aims to have all its production powered by renewable energy by 2020.

Bayer, the creators of world-famous drug Aspirin, is a German pharmaceutical company that was established nearly 150 years ago in 1863. Bayer joins the 2017 list of top 10 pharmaceutical companies thanks to a surge of sales from drug Xarelto, used to treat blood clots and injection Eylea, for retina disease. Contributing to its success was the decision to take a $66 billion merger with Monsanto, a US-based agriculture biotechnology company. The merger is expected to give Bayer an extra boost that will continue to drive up sales and investment in the development of new drugs and treatments.

Eli Lilly is an American global pharmaceutical company. It was founded by Eli Lilly in 1876 and has its headquarters in Indianapolis, Indiana in the United States. The world owes Lilly for the first mass-production of Penicillin, Salk Polio vaccine and insulin and is the largest producer and distributor of psychiatric medications in the world. Other drugs produced by Lilly are namely Arzoxifine, Efient, Olanzapine, etc.

AstraZeneca plc was founded 1999, through the merger of the Sweden-based Astra AB and the UK-based Zeneca Group, is a Swedish-British multinational pharmaceutical and biologics company. It specializes in prescriptive medicines including Carbocaine, Naropin, Betaloc, Zestril, lexinor, Cubicin, Zomig, Tomudex, and a variety of other medicines in the areas of oncology, neuroscience, gastrointestinal, etc. The acid reflux medication called Nexium is its leading product at $5.2 billion. It is also the manufacturer of drugs for cholesterol treatment called Crestor and antipsychotic drug called Seroquel.

Bristol-Myers Squibb was formed in 1989 through the merger of the Squibb Corporation and Bristol Myers and Company. Today, it has it’s headquarters in New York City and produces pharmaceuticals and biologics for the treatment of a number of conditions including HIV and hepatitis. They were also one of the first companies to begin research and development into anti-cancer drugs in the 1970’s.

Gilead was founded in 1987 in Foster City, California and since then, has grown to become one of the world’s largest biopharmaceutical companies. They are a research-based biopharmaceutical company that discovers, develops and commercializes innovative medicines. Gilead Sciences focused on virology, hepatology, hematology, oncology, cardiovascular, inflammation and respiratory diseases. In 2017, Gilead’s top 3 best-selling drugs were Harvoni, Truvada and Epclusa.

Amgen Inc. is an American multinational biopharmaceutical company headquartered in California, United States and is one of the world’s largest independent biotechnology firm. In 2013, the company’s largest selling product lines were Neulasta/Neupogen, two closely related drugs used to prevent infections in patients undergoing cancer chemotherapy; and Enbrel, a tumor necrosis factor blocker used in the treatment of rheumatoid arthritis and other autoimmune diseases. Other products include Epogen, Aranesp, Sensipar/Mimpara, Nplate, Vectibix, Prolia and XGEVA.

GlaxoSmithKline plc is a multinational company based in the United Kingdom dealing in the fields of pharmaceutical, biologics, vaccines and consumer healthcare. GSK was formed by the merger of Glaxo Wellcome plc and SmithKline Beecham plc in 2000. It manufactures products for various diseases including mental health, diabetes, asthma, cancer, virus control, etc. GSK also manufactures nutritional products, drinks and other healthcare goods like Horlicks, sensodyne, Boost, etc. Its top selling drug is Advair and is used to treat asthema and chronic obstructive pulmonary disorder treatment.

AbbVie is an American biopharmaceutical company formed in 2013 and was formed when Abbott Laboratories announced its plan to separate into two publicly traded companies. It was decided that”new” Abbott Laboratories would specialize in diversified products including medical devices, diagnostic equipment and nutrition products, while AbbVie would operate as a research-based pharmaceutical manufacturer that specialises in making small molecule drugs for patients worldwide.

The company focuses on therapy areas such as dermatology, oncology, neurological disorders and metabolic diseases.

AbbVie’s most well known for its rheumatoid arthritis med Humira (Humira makes up more than 60% of AbbVie’s total sales) along with Imbruvica, Lupron, Veikira and Synthroid.

Sanofi-Aventis, a French multinational pharmaceutical company. Its headquarters are located in Paris, France. It conducts research and development and manufactures pharmaceutical products sold primarily in the prescription market. Over-the-counter medicines are also developed by the company. Various drugs manufactured by the company include Aflibercept, Jevtana, Humenza vaccine, Iniparib and Otamixaban. Sanofi-Aventis was formed in 2004 by the merger of Aventis and Sanofi-Synthélabo and later in 2011 changed the name to Sanofi.

Merck & Co., Inc is an American pharmaceutical company with its headquarters located in Whitehouse Station, New Jersey. Kenneth Frazier is the chairman, president and CEO of the company and it was founded in 1891 as a subsidiary of Merck KGaA. It came out as an independent company in 1917 after being taken over by US Government during World War I.

Johnson & Johnson is a US based multinational company which manufactures medical devices, pharmaceuticals and consumer packaged goods. It was founded in 1886 by Robert wood Johnson I, James Wood Johnson and Edward Mead Johnson. The Company’s headquarters is located in New Brunswick, New Jersey. Johnson & Johnson is a leading name in many household items like Johnson & Johnson baby products, Neutrogena skin and beauty products, Band-Aid, Clean and clear facewashes, etc. The other drugs manufactured by it are Bapineuzumab, ceftobiprole, dacogen, procrit, rivaroxaban, topamax, etc.

Novartis International AG, a multinational pharmaceutical company is based in Basel, Switzerland. Novartis has been on the face of the pharmaceutical industry for about 250 years owing to its formation by merger of Swiss companies Ciba-Geigy and Sandoz Laboratories in 1996. Novartis produces a range of products including vaccines, contact lenses, over-the- counter drugs, veterinary medicines, etc. Novartis is a manufacturer of drugs including clozapine, diclofenac, carbamazepine, valsartan (Diovan) and Glivec.

Hoffmann-La Roche is a Swiss global healthcare company founded by Fritz Hoffmann-La Roche after whom the company is named, in 1896. Its headquarters is located in Basel, Switzerland. Other companies owned by Roche are Genentech, Chugai pharmaceuticals and Ventana. It was the first company to produce synthetic vitamin C at a large scale under the brand name of Redoxon. Its leading drug is Herceptin a medication for breast cancer. The various drugs produced by Roche include Accutane, Bactrium, Cellcept, Herceptin, Invirase, Tamiflu, Rohypnol, etc. It also manufactures a range of Diabetes management products under the brand name Accu-check.

Pfizer is the world’s largest research-based pharmaceutical company. Its research headquarters are located in Groton, Connecticut, America. Pfizer has developed many medicines and vaccines like Sutent, Zithromax, apixaban, Macugen, Lyrica, latreperdine, etc. in the areas of oncology, infections and infestations, cardiology, opthamalogy, neurology and psychiatry. Its top selling drug is Lipitor. The company was founded in 1849 in New York City by cousins Charles Pfizer and Charles Erhart.

Want to Know More About Careers in Pharma?

Check out 5 Reasons to Choose a Pharmaceutical Career for an in-depth look at pharmaceutical manufacturing as an industry.

And for more information about the types of jobs you might be suitable for (and their salaries), click on the background that is the closest match to your own:

Take our online, part-time, Conversion Course into Pharma. Retrain for a job in the Pharma Industry OR fill in your knowledge or qualification gaps for our follow-on academic programs. 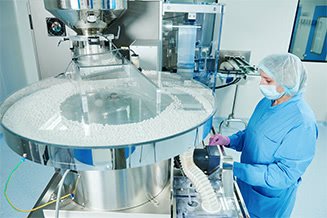 Take our Conversion Course into Pharmaceutical Manufacturing and start well-paid and stable job.